Content marketing: 3 types of stereotyping needs to be removed

You have done everything to promote online marketing. You know about SEO tips, from using long tail keywords to building connections with influential people. And, you are probably paying more to push your website to the top of the list of pages people will search for in your field.

So what else can you do to really make a difference in the market? Unless you do something that no one on the planet does, your content will of course overlap with other pages, at least occasionally.

Everyone is like this: write content similar to those around you. This is very common, especially in the field of online marketing, because most companies hire freelancers to write content for them.

These freelancers can write content quickly, and quickly, but they do not necessarily have to know a lot about what they are writing, whether real estate, travel, nutrition, or fashion ... Because So, they often copy the content on other websites and "transform" it in their own language. The internal pen company also does the same thing.

The problem is, that "private language" tends to be the same.

What to do to make your content different from the crowd? A great way is to identify too common "patterns" and avoid using them. Here are 3 such "models", according to David Loftus - book author, editor for AudienceBloom Advertising & Marketing Company and Sesame Communications Company. The article is posted on the Entrepreneur website:

1. Which word is most used on the internet?

There are at least two principles that make this word a bad choice:

- Repeating anything also weakens its impact. The more repetitive a word is, the less striking it becomes.

- Insistence makes everything suspicious. How would you feel when someone declared stronger than anyone in the room about something? In the best case, you will feel "Who cares?". The worst case scenario, you doubt that person is wrong, and they cannot prove it.

There is a more effective strategy, prove your point from the beginning, instead of trying to convince others by labeling it "important." In other words: "Don't say, show them."

Anything you share with the reader must be attractive enough so you don't have to say it's important. Readers read the article because they want to see you will give them something valuable and attractive, not because you assert to them that it is "important".

Or at the very least, you should reduce the number of times you mention this overused adjective. Because many people even use it many times in the same paragraph. There are many other adjectives to replace such as "necessary", "useful", "essential", "vital" ... Each word of course has different meanings, but depending on the context, most of them are can replace the word "important".

Also, instead of saying "It is important to follow the data analysis process", you can also try using "smart", "sharp", "wise", "worthwhile" words. ... when referring to the process of an action.

To increase the number of times mentioning a word in the article for the website, the pens often say one thing more than once. Sometimes, a point needs to be repeated, but too often will lead to redundancy.

Sometimes the writer is fully aware of this, in order for his article to ensure the correct number of words as required. For example, in the editorial process of online marketing articles, a few words, phrases that I had to cut or rewrite many times over the years are "tips and tricks," " duties and duties "," tools and resources "," consensus "...

These phrases include many words, to say something that can be described in just one or two words. If the article contains too many of these phrases, the implicit message that readers can feel is: "You don't have to pay much attention to what I'm saying, because it contains a lot of unnecessary things. Not every word has value.

In fact, writing should be different from spoken language, because reading is more active than listening. Especially when your mission is to direct readers to take action, such as calling them to give you their contact information, or want them to use your service.

Therefore, do not repeat the word. Cut back on redundancy. "Train" your ability to pay attention to your readers.

Another way to "help" sleepy readers is to repeat phrases and images that have appeared in other articles. There is nothing wrong with this way, but when the same phrase and image appear again and again, the readers' attention will be scattered.

If you are not interested in doing something new, why should readers pay more attention to your article? The stereotyped words that I most often see on websites are: "in the modern business world", "nothing unexpected", "now is the time to", "when it comes to", "it is a good idea to ”…

For example, there is a case at the beginning of the article that the phrase "It is undeniable ...". That's when you think of course the reader will agree with you right away, and that whatever you say is of course attracting their attention. This is another way to say "This is important" instead of straightforward and shows readers what it is.

Unfortunately, this may make them think of a case that someone may have denied what you are claiming.

Similarly, when coming to conclusions, don't write "Now you understand" or "Now you're convinced", because that may not be the truth. How do you know what's going on in the minds of readers? Just say what you have to say and let the reader decide what they believe or have learned from the article.

I often find writers using the word "innumerable" when they simply mention a large number, such as: "There are countless times when ..." or "countless studies" ... However literally Those things are completely countable, if there is enough resources. Therefore, it is wiser to avoid using the word "countless" unless you are referring to the amount of sand grains on the coast, the number of stars in the sky .... However, things like that often shouldn't appear in a good article in the business area.
Source: doanhnhansaigon

Finds the 'unoptimized' points that make your Google Ads ineffective. 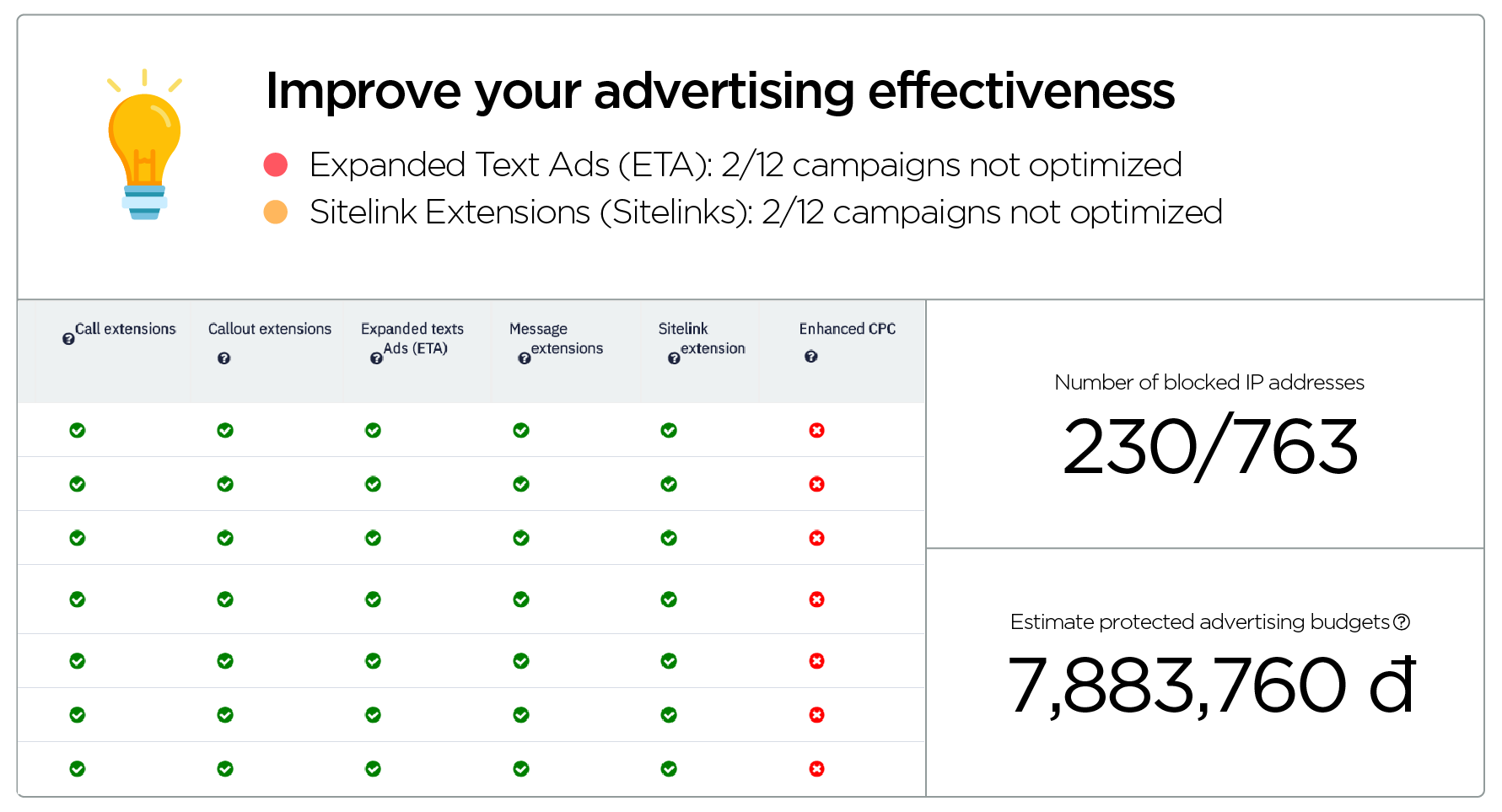 Complete all the professional features and experienced support